By Joe Pinkstone For Mailonline

An AI-powered computer system has been created that identifies the emotional state of farm animals and whether or not they are happy.

It is hoped that a better understanding of how animals feel can help improve their living conditions and quality of life.

Thousands of images of cows and pigs from six farms around the world were used to form the network, called WUR Wolf, which was accurate 85% of the time.

Scroll down for video

An AI-powered computer system has been created that identifies the emotional state of farm animals and whether or not they are happy. In the photo of one of the images the system has been tested on, which reveals a pig classified as “alert and neutral” 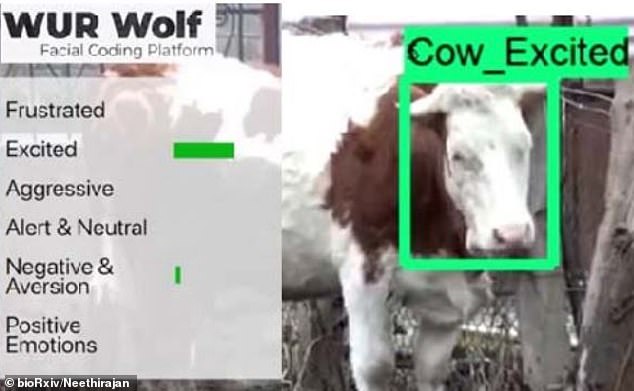 Deep learning algorithms were used to identify 13 facial actions that included a difference in an animal’s ears, eyes and behavior., Pictured is an excited cow

The software was developed by Dr Suresh Neethirajan from Wageningen University in the Netherlands and the results are published on bioRxiv.

Deep learning algorithms were used to identify 13 facial actions that included differences in the ears, eyes, and behavior of the animals.

These are then correlated with nine different emotional states, including whether the animal is aggressive, calm, or neutral.

For example, if a cow’s ears are erect, she is probably excited, but if her ears are pointing forward, she is likely feeling negative emotions, such as frustration.

Pig markers also focus heavily on the ear and if they contract quickly they are likely to feel stressed, while if they are hung up and turn in the direction of the eyes the animal is in a neutral state. .

The 13 facial cues feed data into the Ai system, which then determines which of the nine emotional states (shown) best applies to an animal at a specific time

These indicators provide insight into how animals are feeling and could be used to monitor farm animals to ensure they are as happy and satisfied as possible.

“There is a need to move away from simply eliminating negative emotional states to providing positive states, such as playful behavior,” said Dr Neethirajan. New scientist.

He believes the technology will take a number of years before it is ready for use on farms.

But he says continuous monitoring would help farmers consistently maintain higher welfare standards than the current system of inspections and audits.

“The ability to track and analyze how animals are feeling will be a breakthrough in the implementation of animal welfare audit tools,” writes Dr Neethirajan in his article.

“Technological advancements in animal behavior are a big step forward in improving humans’ understanding of the 385 animals they share this world with, but there is still room to grow.”